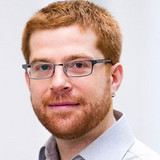 Show Academic Trajectory
Ego Network
D-Core
Research Interests
Author Statistics
Experience
Sign in to view more
Education
Sign in to view more
Bio
Jonas Buchli is a SNF Assistant Professor for Agile and Dexterous Robotics at ETH Zurich since May 2012. He holds a Diploma in Electrical Engineering from ETH Zurich (2003) and a PhD from EPF Lausanne (2007). His thesis work is about adaptive frequency oscillators and modeling and design of robotic locomotion pattern generators. At EPFL he organized the 2006 Latsis Conference on 'Dynamical principles for neuroscience and intelligent biomimetic devices'. From 2007 to 2010 he was a Post-Doc at the Computational Learning and Motor Control Lab at the University of Southern California, where he was the team leader of the USC Team for the DARPA Learning Locomotion challenge. From 2010-12 he was a Team Leader at the Advanced Robotics Department of the Italian Institute of Technology in Genova. Jonas Buchli has received a Prospective and an Advanced Researcher Fellowship from the Swiss National Science Foundation (SNF). In 2012 he received a SNF Professorship Award from the Swiss National Science Foundation. He has contributed to research in diverse fields such dynamical systems approaches to motion generation and control, the theory of coupled oscillators, planning and control of dynamic locomotion, machine learning, whole body control, whole body force and impedance control and modeling of human motor control. He was involved in the development of robotic platforms as well as software engineering projects for robotic control software. His current research interests include model based control of legged robotic and human locomotion and manipulation, machine learning and adaptive control, and dynamic and versatile service and field robots.