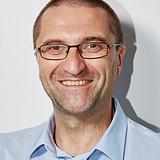 Show Academic Trajectory
Ego Network
D-Core
Research Interests
Author Statistics
Experience
Sign in to view more
Education
Sign in to view more
Bio
In control problems, complex mathematical models, such as systems of differential equations, are usually checked against simple specifications. Examples include the stability of on operating point, the invariance of a set, controllability, and observability. Informal analysis (verification), rich specifications such as languages and formulas of temporal logics, are checked against simple models of software programs and digital circuits, such as (finite) transition graphs.
The main focus in my group is the development of computational tools for bridging in this gap, and therefore allowing for specifying the properties of continuous and hybrid systems in a rich language, with automatic verification and controller synthesis. The application areas are robotics and biology.

Calin Belta is a senior member of the IEEE and an Associate Editor for the SIAM Journal on Control and Optimization and for the IEEE Transactions on Automatic Control. He received the AFOSR Young Investigator Award in 2008 and the NSF CAREER Award in 2005.