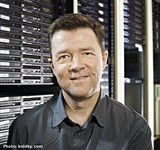 迁徙路线
网络关系
D-Core
研究兴趣
作者统计
ACM_Citations
工作经历
点击登录, 查看更多内容
教育背景
点击登录, 查看更多内容
个人简介
Christian S. Jensen is an Obel Professor of Computer Science at Aalborg University, Denmark. He was a Professor at Aarhus University for a 3-year period from 2010 to 2013, and he was previously at Aalborg University for two decades. He recently spent a 1-year sabbatical at Google Inc., Mountain View. His research concerns data management and data-intensive systems, and its focus is on temporal and spatio-temporal data management. Christian is an ACM and an IEEE fellow, and he is a member of the Academia Europaea, the Royal Danish Academy of Sciences and Letters, and the Danish Academy of Technical Sciences. He has received several national and international awards for his research. He is Editor-in-Chief of ACM TODS and was an Editor-in-Chief of The VLDB Journal from 2008 to 2014.